“My experience with the Systemic Family Constellations was profound. Having been adopted and reunited with my biological maternal family, I learned that the theme of abandonment ran through the generations.”

My biological mother had abandoned four daughters, and each of us had an eldest child who was abandoned by their fathers. I had heard of family system constellation and it was the only form of therapy that I was aware of that would address an inherited pattern and it was my intention to clear that pattern for myself and my daughter. Two days prior to my scheduled constellation, I learned that my biological maternal grandmother had abandoned two children prior to meeting my grandfather. She was judged harshly by her family and carried the guilt and shame with her. I believed I had discovered the point of causation. The constellation work took me beyond my intellectual understanding into revelation of the dynamics of unconscious genetic programming by enabling me to observe and experience the energetic pattern to which I had been born into and which had affects in my relationships throughout my life. 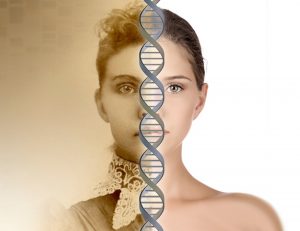 I was asked to invite one of the group of participants, strangers to me, who attended the Constellation, to “be” me, and to guide her to a position in the space that “felt right”. All of the selections and positioning are done by intuition, by feeling, rather than by intellect or reasoning.

The sensations are so strong as to whether a position feels right, as are the effects that take place in the people who are positioned, that the rational mind cannot doubt the validity of what is happening on this “stage”. I had not thought about my biological father prior to the Constellation, and when I was asked to place him in the space, I placed him far from “me” and facing away from me, that we could not see each other. This was what felt comfortable to me, though the analysis of the placement does not precede, but follows the placement. As I realize that we cannot see each other and I placed him facing away from me, I thought, “of course, it makes sense that I would feel comfortable with him over there, because that’s where he has always been.”

When Carla gently touched him and asked how he was feeling, he responded that he didn’t really feel anything, as if he didn’t know why he was standing there. She had him turn to face his daughter and, over the face of this complete stranger, who did not know the story, came a look of shock, followed by “I forgot.. I forgot…. I’m so sorry, I forgot.”

This was fascinating to me as I imagined he had forgotten I existed at all. His relationship with my biological mother was very brief, when she informed him of the pregnancy, he left her, and the next time she saw him was after the adoption. She told him, “It was a girl, I gave her up for adoption.” and he got up and walked away without a word. I believed that he truly forgot that there was a baby 43 years ago.

Upon remembering that he had a child, the stand in for my father then became angry with my biological mother blamed her. “It’s not my fault. You didn’t give me a choice!” and she responded, “It’s not my fault, you left us.” The person standing in as my mother had the exact intonation, the righteousness of my biological mother. All of what transpired made perfect sense and I knew that what was being portrayed was accurate on a deep level. None of these people knew the story but felt these things by the positioning in the space and energy dynamics. My maternal grandmother was brought near my biological mother, who turned her back to her mother. The woman standing in as her mother wanted to be near her daughter, close to her daughter and the guilt was all over her expressions. Carla then brought in another person but did not say who this person was and placed her near my biological grandmother.

I knew at once that this was my great grandmother. When Carla asked her how she felt, she said she felt frustrated and cold and angry and she just wanted (her daughter) away from her, to get out of her way. At the time, it became clear that whether or not she spoke these words to her daughter in life or simply carried that feeling, my grandmother picked up the energy of not being wanted, or being a burden and obstacle to her mother. It now, made sense that this pattern originated here. This event, caused the woman playing my mother, to forgive her mother and for them to approach me together.

It was not until a week after the constellation, that I learned that my grandmother was the 7th child of 15 living children, and of 19 preganancies. Of course, the mother of 15, living in poverty, would at least at times, feel burdened by her children. My biological grandmother internalized this very deeply and it resulted in a pattern of abandonment that ran through the females for three generations.

There were further interactions, during which I replaced the person representing “me”, and which brought love, harmony and release in these relationships. The Constellation concluded with interactions which enabled me to stand feeling not only free from the pattern, but very much supported by all of the family members behind me. I knew, deep in my heart, that the pattern had been cleared.

Most remarkably, the shift not only had obvious effects in my life over the course of the following week, but in the life of my daughter and my biological mother. All had energy freed up in different areas, especially regarding our creative self expression. A variety of subtle and specific changes, shifts in perception and liberation in creative expression occurred within the three of us over the course of the two weeks following the session. Here, a month later, I feel as if I have entered a new world, with new possibilities -not unlike the experience of moving to a new country.

I whole heartedly recommend this work to anyone who was adopted or who gave a child up for adoption. This work Is powerful, immediate and it’s effects are far reaching. “