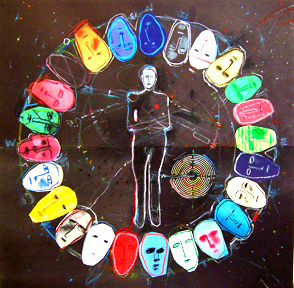 Hidden Family Dynamics
“I have three young kids” said a friendly woman voice when she called me a while ago. “I want to be the best possible loving mother, and I think I am doing quite well. Though, my own mother (Louise) has always been aloof and cold towards me, as  her own mother was to her. I do not want my children to continue with these patterns and dynamics and I would like to see what I can do about that in your next  Awaken to Your happiest Life! workshop (Family Constellations).
Well, she came and the work showed clearly that the mother of my client, Louise, who was not present herself, felt disconnected and aloof from her family. In other words: Love wasn’t flowing. Apparently it became clear that  Louise was very connected to her grandmother. When I asked my client what happened in their lives, she remembered that her grandmother was the daughter of a native American woman who had 5 children from a white American man. Louise became extremely emotional when Native Americans and White Americans as a group were positioned. She run over to the Native Americans and  was overwhelmed with grief.
The history was as follows: One night a few men from the village came down to rape and murder the grandmother of Louise  and put the house on fire. Her 5 children were “watching.” Imagine what a tremendous trauma this must have been for them. With such experiences children can take the decision, subconsciously, that LOVE is frightening and that they rather don’t want to love at all anymore, a decision which has a deep impact on the soul. To avoid such terrible pain one  “closes” his/her heart. To be a child from two worlds, cultures who were each others enemies, is a schizophrenic situation.  A perpetrator and victim united in one person. Louise seemed to have identified  with her grandmother on a deeper level. This  loyalty to family members who came before us is not unusual. Acknowledging and honoring the wounds and suffering can open the gates to the flow of love. There is no resolution in forgiving in the name of others, that is not on us.
According to clinical psychology science traumas are stored in the limbic brain for about three generations. Traumas are nothing else than energy fields, present as a block in our system. There are several ways to release traumas. This constellation showed the hidden dynamics and a shift took place. A year later my client called me to say that the relationship improved quite a lot between her and Louise. Working with the energy fields of the family: the impact can be a huge shift and far reaching.

Living a life of Love: What you focus on expands. Acknowledge what runs in your sub and unconscious that might be negative or harming you, and release all that in order to be balanced and  being the authentic, fearless real you! The bonus is that you will be more happy, authentic, fearless and healthy!