Why your success can be blocked by ancestral experiences

In the late nineties, while I was still living in the Netherlands, I attended a systemic constellation workshop in Germany, facilitated by Bert Hellinger the founder of this work.

As often happens in constellation workshops, several of the people in attendance miraculously had a theme or concern in common. In this one there were 4 young well-educated German professionals, 3 men and 1 woman, all with the same problem.

It appeared that all of them were successful in their entrepreneurial undertakings. However, unexplainable situations constantly led them to lose the money they gained. It looked like they were successful in manifesting, but “something” made them lose it all.

Because a “family” is seen as a system that spans several generations, the energy of the system always wants to be balanced. That means any unhealed and suppressed trauma, or unacknowledged injustices, need to be brought into the daylight and integrated into our systems, so peace can be restored.

Acknowledgment is usually the first step. Of course, none of us know our entire family history. Yet, important aspects can reveal themselves with laser-sharp precision IF there is a correlation.

So, Bert Hellinger asked questions to these 4 people like: “What happened in your families? Did someone take from others, steal, or confiscated from others unlawfully?”
To our unbelievable surprise, all four people had grandparents, who during the Nazi era, took the businesses, homes, goods, and /or money from Jews who got deported and/or murdered.

As happened in all European countries occupied by Germany, Jews were summoned to give everything they had to the authorities, or it was taken altogether after arresting and deporting them.
As a result, most of the few surviving Jews never got anything back, not their homes, businesses, possessions, etc. Sometimes not even their children.

On a side note:  A well-known example is the family story of Billy Joel. the American popular musician.

In Germany, his grandfather built a textile mail order company in the 1920s and ’30s, and that was taken over force without payment by Joseph Neckermann, which has never been given back the company and it is still prospering in Germany.  The Joel family left everything behind and could survive by fleeing the country to America, just in time.

The documentary “The Joel files: a story of two families” where Billy Joel is filmed visiting Germany and the company is worth watching. You can see a great example of the cognitive dissonance on the side of the Neckermann family. Yet, even though Billy Joel became very successful with his great musical talent, we cannot draw any conclusions here about the mental and emotional entanglements that could exist in his family system. Those entanglements often appear as depression, anger, or other difficulties.

Back to that constellation with Bert Hellinger.
Conscience is a strange thing. It can be totally silenced by cognitive dissonance. As Hellinger speaks about “the greater soul”, meaning there is a bigger collective consciousness where facts are stored and impact constantly, we individuals can be part of a chain without knowing why.

But we do know we can impact collective consciousness with our thoughts, energy, and inner work. Acknowledgment along with some typical constellation sentences and rituals can bring peace back to the system in its entirety, and the natural flow of abundance, and love, can be restored.   As it turns out, whenever we do not understand why certain things happen, it’s usually a good time to set up a constellation to enable us to look a little deeper behind the scenes, just like these professionals did.

We can also conclude that even if we only say prosperity-focused mantras and affirmations on a daily basis, they may not be sufficient to create a permanent successful life.

Here you can see a simple example of how entanglements are created and how they can impact us: 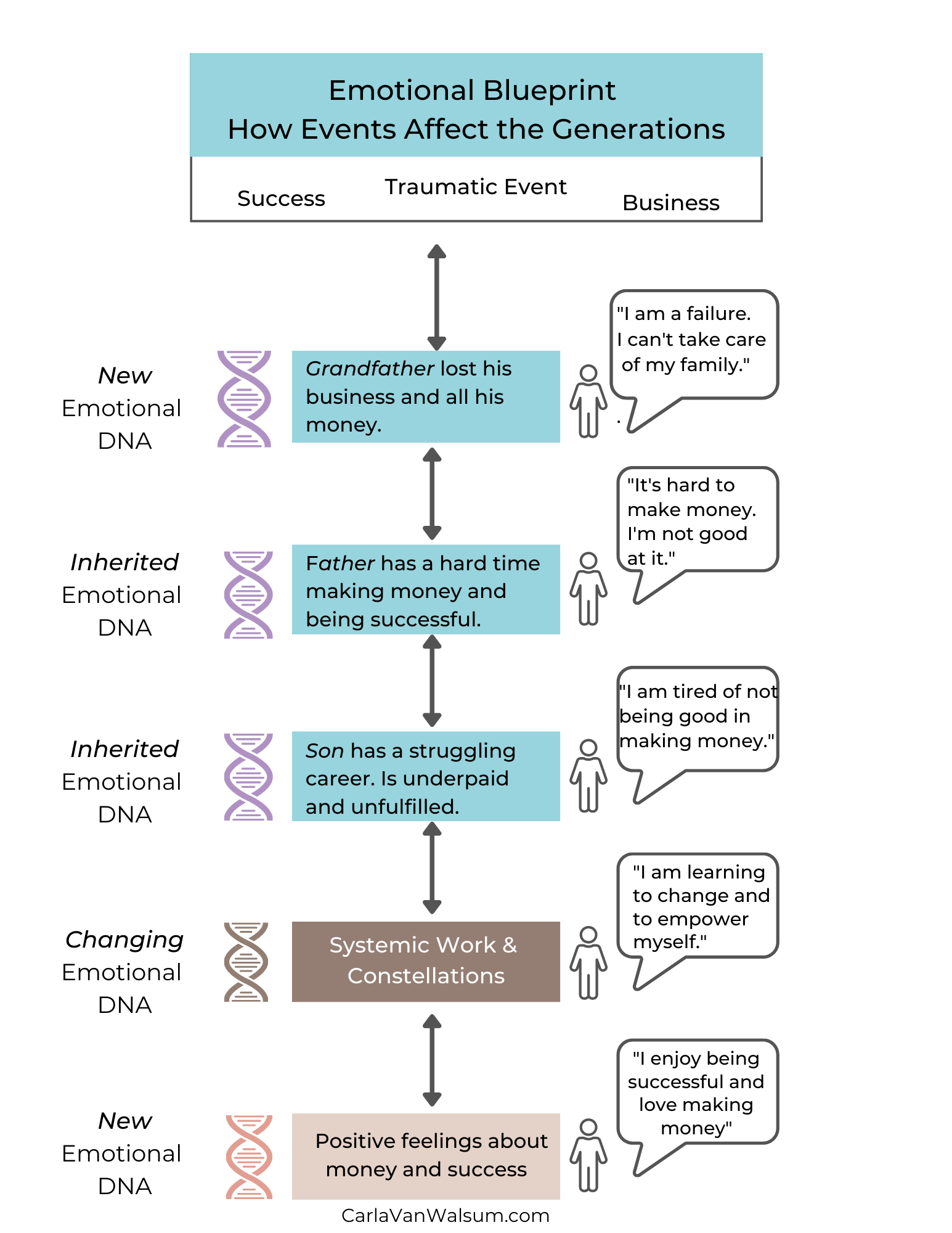 If you feel like trying it out, join our upcoming workshop
Sunday, September 25th in Boca Raton.
We will do exercises that will benefit everyone, see the program planning, and a few people can do an entire constellation.